My goal with these blog posts is to summarize and reflect a little bit about things/content I’ve learned – my blog seems to be a good way to keep this for later on after the MOOC.

Week 3 is about an introduction to Social Network Analysis (SNA) and insights how social processes unfold. „SNA aims to understand the determinants, structure, and consequences of relationships between actors“ (Source http://www.lifescied.org/content/13/2/167.full.pdf+html) SNA is multidisciplinary (not only sociology and statistics) and main analysis methods are density, centrality and modularity types of analysis. We’ll do some analysis with test data and again visualization, this time with Gephi. The interesting thing will be what’s the use of SNA for learning (I’m not there yet).

Networks consist of actors (=nodes) and relationships/connections which can represent friendship, advice, hindrance, communication. In a spreadsheet nodes and relationships would be represented in rows (and weight via adding as many rows). Data can be collected by self-reports, interviews, collection from social networks (who is following whom on Twitter etc.) and special tools which collect data from LMS (activity in online discussion boards,..) and later on be analyzed in tools like Gephi. As these networks are seldom static, you have to decide on a time frame when collecting data. Also important: Anonymizing data, obtaining consent (which may lead to incomplete networks), ethics

a) Measures which are measuring the entire network:

b) Measures which are measuring the potential of individual nodes in a network:

* Concept of Centrality: (The meaning of centrality is dependent on the kind of different metric which is used)

*** In-Degree centrality = Pointing to an actor / „how many other nodes are directly trying to establish communication or are talking  to a particular node“  (popularity, prestige)

*** Out-Degree centrality = Pointing away from an actor / „outgoing connections, may mean how many emails someone sent, generosity in conversations with others“  (gregariousness)

It also can be interesting to think about network modularity, e.g. smaller subgroups that are closely connected to each other (modules=communities). It is relevant for later use of modularity algorithms to identify the „giant component“ and use it as a filter.

About Gephi
Installation was easy but when I played around with the test data we were given, I even didn’t find the function to zoom in so I watched this YouTube video which was very helpful to get an overview of how to use Gephi (17 min very well spent): http://youtu.be/L0C_D68E1Q0

As I haven’t done anything like this before, I reduced my tests with the example blog dataset of week 6 to the „Average Degree“ and tried to find something useful. My results are in the attached pdf-file: w3-gephi-2 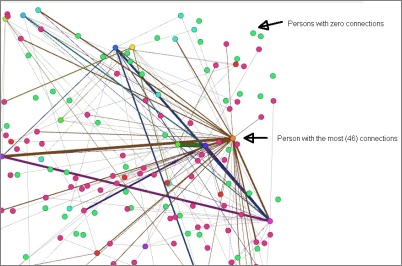 I’m looking forward to week 4 – maybe the Hangout times of day will be a little bit more convenient for Middle Europe again. And I still have to try Bazaar (I really want to do that), but again, this week, I had no time for that.